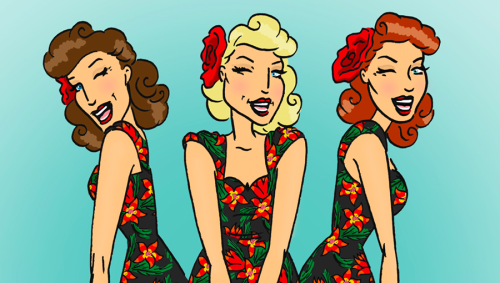 The Siren Sisters were formed in 2010 and have appealed to a wide variety of audiences. They have found famous supporters in Only Men Aloud, Welsh Rugby Union star Ryan Jones, Roy Noble, and A String of Pearls’ Dewi Griffiths, to name a few. In recent years they have toured Welsh theatres with their highly successful Christmas With The Siren Sisters show and are involved in some very exciting projects for the near future.

The trio has based their success on a true representation of the 1940s era. You don’t have to look too hard to see the attention to detail in the hair, dresses, and shoes that are inspired by such a special era. But you simply have to see these young ladies in the flesh and hear how talented they are; from the tightly choreographed dance routines, to the smooth vocal harmonies, these girls can blend together or take solo performances with elegance, grace and, most importantly, an enthusiasm driven by their obsession with all things vintage.

The Siren Sisters have appeared as regular guests on:

The Siren Sisters Television appearances include:

Charitable Performances include appearances for:

“This blonde, brunette and red head combo are fast gaining a reputation for their nostalgic shows.”